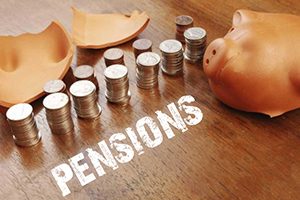 Your retirement income may be in danger if you have a final salary pension as a financial black hole threatens to keep swallowing cash.

Although many employer pensions are flush with funds and making good investment returns, concerns are rife about some others that are billions of pounds in the red.

In recent months, British Home Stores and Tata Steel have stolen the headlines as schemes that could do better – but they are not the only ones struggling.

Companies in the FTSE100 – Britain’s biggest firms – fell a further £95 billion into deficit last year. They are underfunded by £681 billion, says a study by JLT Employee Benefits.

And this is when only 53 companies actually pay final salary benefits to around 1% of their employees.

In the year, the companies paid £11 billion into their pension deficits, but JLT has calculated 41 of the FTSE100 companies could wipe out their liability if they suspended paying shareholders dividends for just one year and diverted the money to their pensions instead.

Financial watchdog The Pension Regulator (TPR) has wised up to this and threatened to take regulatory action against trustees putting shareholders before employees if the pension scheme is in the red.

The government has also threatened to bring in a new law to punish directors or trustees who ‘deliberately or recklessly’ fail to meet their pension obligations.

But no mention was made about this in The Queen’s Speech which laid out the government’s legislative programme for the next two years.